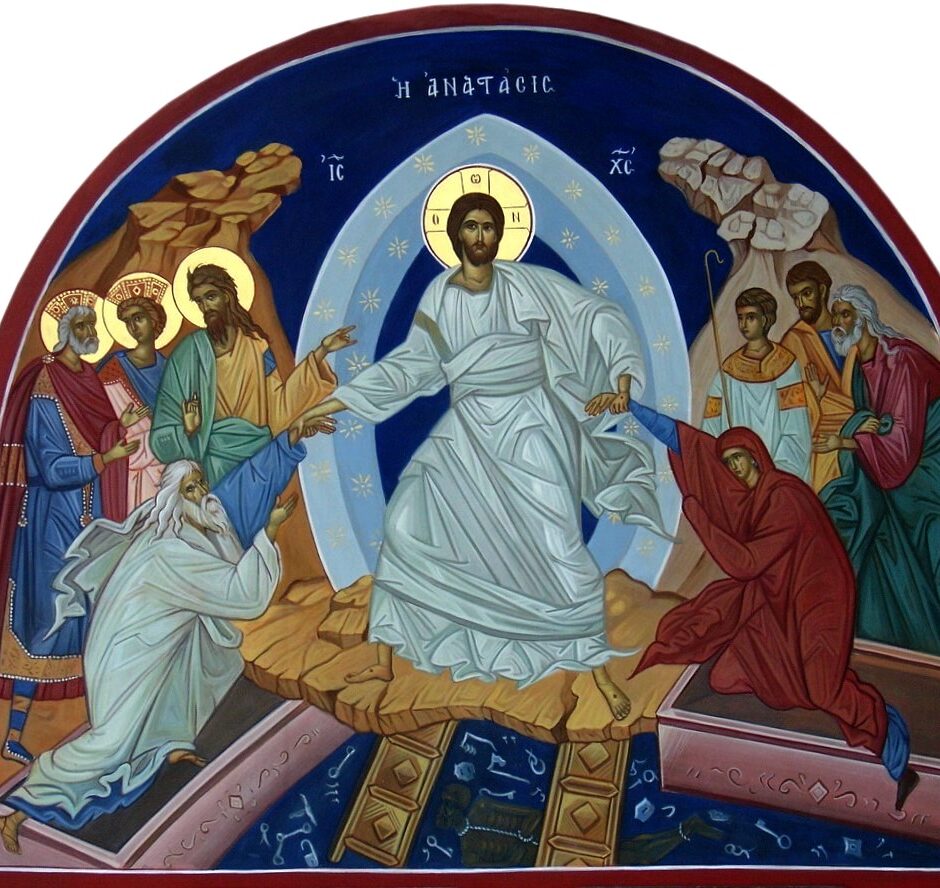 Alleluia! Christ is risen! The Lord is risen indeed. Alleluia!

On this day the Lord has acted! My friends, it is now our turn to rejoice and be glad in it.

And why do we rejoice on this day? Because Christ, the world’s Redeemer, the Messiah who is the Way, the Truth and the Life – because THIS Divine Master has smashed the powers of death and hell and the grave. Death is dead! Life is born again!

And not only that! We rejoice on this day, because in this Messiah, WE TOO are set free RIGHT NOW from that old life that leads only to death. Alleluia!

There is no going back to the way things were. We can never go back to that old way of life. Everything now is new. Alleluia!

There is also another reason to rejoice on this fourth day of April. Do you know what it is? In addition to being the Eighth Day, the Day of Resurrection in this years calendar, 4 April is also the day each year when the Church remembers Dr. Martin Luther King, Jr. as a modern-day martyr. This is the day when Dr. King was assassinated on the balcony of the Lorraine Motel in Memphis, Tennessee.

Because your birth is not something that you can choose. It just happens to you. In a sense, every birth is the same – more or less!

But your death is something entirely different. It is shaped by how one chooses to live. How you die, the manner of your death, sometimes even the timing of your death, is affected by the choices you make.

And in their deaths, the saints of God have the final opportunity to give praise to their Redeemer. THAT is the time when they receive their reward, when they hear the living God say to them, “Well done, good and faithful servant.”

Dr. King’s death was a direct outcome of his way of life. He did not shrink back in fear from the powers that be. He spoke truth, regardless of the risk to his own safety and welfare.

In the same way, our Lord’s death likewise was a direct outcome of his way of life. He did not shrink back in fear from the powers that be. He spoke truth, regardless of the risk to his own safety and welfare.

But do you know why Dr. King was able to do what he did? Why he was able to be so bold and courageous in his life? Why? Because he followed in the footsteps of the Master of Life, the One who could not be held down by the grave.

Because the power of GOD brought Jesus back to life again, Dr. King – and all the saints of God who have faced the scorn of the powers head on, without fear or cowardice – because of the new life of Jesus, Dr. King was able to keep going and to never, ever quit.

Death never gets the final word! God does. Alleluia!

Did you happen to notice that ancient Greek icon on the cover of today’s bulletin? I know, the image isn’t great. It’s only black and white. [Below this text]. But take a look at it, if you can.

It is titled “He Anastasis Yesou Christou” – the Raising Up of Jesus Christ. Do you notice the most striking aspect of this image? It is that Christ does not rise alone! Here is Christ rising up, and as he does this, he is pulling up with him the ancient ones – Adam and Eve – out of their symbolic graves, while others look on in amazement.

You see, everything in an icon is done with purpose and intention. If you look closely enough, you will see that they are not even holding hands. Not at all! Rather, Christ has literally grabbed them by the wrists and is pulling them out of the slumber of death into a new and risen life!

By looking at the image, we can’t even be sure if they want this! Maybe they would rather stay sleeping, but it doesn’t matter, because Jesus is having none of that! Get up, he says! You are rising with me! I am pulling you up into the heavens, and everything is being made new!

And what do Adam and Eve represent? All of us. All of humanity! Even you and me. None of us are left behind by this Resurrection.

What was the message given to Mary Magdalene and the women at the tomb? “Go, tell his disciples AND Peter that he is going ahead of you to Galilee.” Now, why do you think Peter is singled out by name?

Jesus has just been set free from death and the grave. But he is also set free from that ancient human game of casting blame, of figuring out who is at fault, who is responsible!

Think about this. Jesus had just experienced the most profound betrayal that you can imagine. Do you know what that feels like? To have your friends stab you in the back and leave you vulnerable and alone, just when you need them most?

Now compound that with mountains of false accusations from the chief priests and from Pilate. They totally misunderstood him. And worst of all, he was mocked and tortured – literally tortured! – before experiencing the most painful form of public execution known to the Roman authorities.

And yet, despite all of that, when this Holy One rises from the dead, does he go looking for revenge? Does he hunt for his betrayers and punish them for their treachery?

Absolutely not. In fact, he does just the opposite! Go tell his disciples – and Peter, the one who denied him three times! – go tell them that I am going home and I’m going to meet them there.

My friends, this is the amazing, mind-blowing good news of the Resurrection! There IS a new life that is available to each one of us, and to all of us together.

It is a life entirely different from the old life. In the midst of the death and pain and suffering that plagues humankind at every turn, there is an invitation from our Creator to start again, to start over, to begin a brand new life!

When we are IN Christ, then we are able to walk the same path that he walks today. And the Resurrection sets US free from the need to punish others, from the need to get revenge. Our new life in Christ sets us free even from the desire to get back at those who wronged us.

THIS is what Dr. Martin Luther King, Jr understood – thanks be to God! To those who accept it, God gives power to live by love alone.

Listen to a few of his words from his book called The Strength To Love:

“The God who brought our whirling planet from primal vapor, and has led the human pilgrimage for lo these many centuries, can most assuredly lead us through deaths dark night into the bright daybreak of eternal life…Death is not the ultimate evil. The ultimate evil is to be outside God’s love.”

(The Strength to Love)

Jesus lived his entire life inside the very heart of God’s love. And that redeeming love can never be defeated, not even by death.

You have the choice to live your life in Christ, in the very heart of God’s redeeming and everlasting love. You can be set free right now to live a brand new life, to start again with our Risen Lord Jesus Christ. Alleluia! And Amen.