Harden Not Your Hearts

“Harden not your hearts, as your forebears did in the wilderness, * at Meribah, and on that day at Massah, when they tempted me.” (Psalm 95.8)

“Ever welcome in this House of Worship are the strangers and the poor.” (REPEAT)

No, I am not speaking of Saint Mary’s. These words were painted on a large sign that hung directly inside of the entrance at the Illinois Street Church in Chicago.

Those words captured the deep heart of the pastor, the great Dwight Lyman Moody.

Have you ever heard of him? DL Moody? Do you know about his life and work? His is a story worth knowing, and maybe it will be a good distraction from too many thoughts and worries about our current national emergency.

Dwight Lyman Moody was born in 1837 – and he died in 1899 – both in Northfield, Massachusetts, right on the banks of the Connecticut River. He was the sixth of nine children and his father died suddenly when Dwight was only 4 years old.

It was necessary for him to drop out of school at age 7 so that he could work on the family farm to help support his family. Age 7! That was a hard life, and he grew tired of it. But as a young man he had no direction in life, except for a keen desire to make some money, to change the circumstances of his life. His stated goal was to earn $100,000 – quite a fortune in the 1850s.

So at 17, he went off to Boston to work in his uncle’s shoe store. The store was doing quite well and the uncle needed reliable help, so he agreed – but on one condition: that young Dwight go with him each Lord’s Day to the Congregational Church of Mount Vernon on Beacon Hill. That church building is no longer standing, but Dwight went along and he attended a Sunday School class for young men.

After a few months, his Sunday School teacher came to visit young Moody at the shoe store. They talked, and the teacher took this opportunity to explain the Gospel in detail to this young man, that Christ loved him so much that he was willing to die for him, so that Dwight could be free and could start a brand new life in the kingdom of God.

The message was received. Dwight gave his heart to Jesus and he pledged to serve the mission of our Redeemer, although he did not yet know how he would do so.

The next year, DL Moody headed west to the boomtown of Chicago to start his own shoe store and to make his fortune. But he soon began to notice the many street children, poor uneducated boys who wandered the streets of Chicago. And he felt compassion for them.

In those days, people still bought their pews. That’s how local congregations were supported. Moody bought four pews in the Plymouth Congregational Church in Chicago, and on most Sundays he filled all of them!

Do you know how? He offered candy and rides in horse-drawn wagons to the street kids so that they would come. He went into local bars on Saturday nights and early on Sunday mornings to get some of the inebriated young men to join him.

DL Moody felt the joy and love of God as he brought all of these needy young people to the House of God on the Lord’s Day, but that’s not what he felt from the other parishioners. Because these kids were loud, were smelly, and undisciplined. The other regular churchgoers made it quite clear to Moody that these were the wrong kind of people. 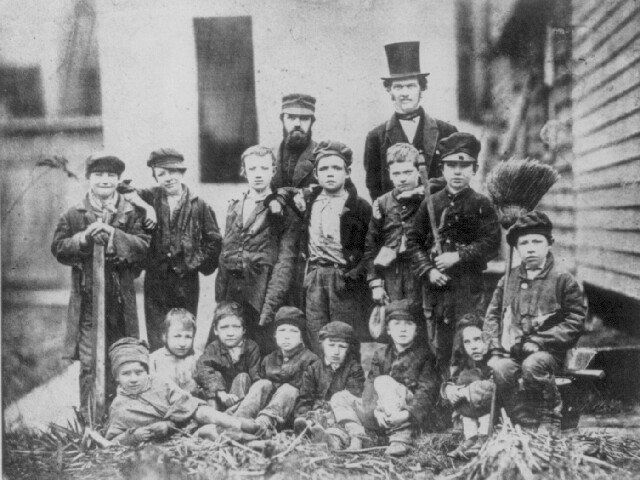 (Here is a photo of Moody with some of these young ones. Moody is the shorter adult in the rear.)

We might expect that those who claim to love Jesus and follow his way would know better than this, would understand what it is that God desires from us. But unfortunately, this has not always been the case – not even here in our own house of worship.

So Moody started his own Sunday School, and his own church, where the strangers and the poor would always be welcome.

He went on to become one of the greatest evangelists of all time. Moody preached to perhaps 100 million people across the US and the British Isles without the aid of microphones or sound systems or amplification! And he spoke to all of these people about the love and kindness and compassion of God.

Moody was relentless in his care for people, in his desire to reach people with the love of God. In 1879 he founded his first school: the Northfield Seminary for Young Women.

A few years later he followed this with the Mount Hermon School for Boys. Both of these had the same goal: to offer sound education to the poor, to minorities, to those who were most in need.

(You may have heard of the Northfield Mount Hermon School! Well, it certainly has changed in the last 140 years.)

Until the day he died, this was the driving passion of his life, to introduce as many people as possible to the living water of Christ that quenches all thirst.

In one of the verses left out of our Gospel reading today, it is said that his disciples came back to the well and “they were astonished that he was speaking with a woman.”

Not to mention the fact that they were already IN Samaria, talking with and dealing with Samarians! This was something considered uncouth, unkosher. The Samaritans were those people who were “less-than”. People in good society stayed away from them, just as the upstanding people of Plymouth Congregational Church in Chicago stayed away from the rifraf out on the streets.

There can be no doubt about it. By society’s standards, Jesus kept on reaching lower and lower down the rungs of social standing.

He didn’t care. No, we must say that differently. He DID care. THAT was his point. He cared about everyone, no matter their position in society!

DL Moody got this right. He really did. He may not have been very well educated. Surely his theological training was lacking. But…intuitively, instinctively, he knew what Jesus was all about. He understood the heart of our Redeemer and he was willing to give his all to do the same things that Jesus did.

What were the words of the sign that hung inside the entrance to Moody’s Church in Chicago? “Ever welcome in this House of Worship are the strangers and the poor.”

The Hebrew people were the strangers and the poor as they wandered through the wilderness, trying desperately to make it to the Promised Land. These stories in Exodus make it abundantly clear that these people were not docile and meek, and certainly not passive and easygoing.

Not at all. They were difficult and rough and quarrelsome. And yet, GOD loved them. God cared for them, and provided generously for their needs.

My friends, we find ourselves in this odd time of a national emergency.

It is tempting, in a time of crisis such as this, to turn inward. In a physical sense, of course, we all must do that now. We all have to take some time off from life as usual and to practice this very odd thing that is called social distancing.

It is what it is, and it is the prudent thing to do. But by the grace of God, we can do this in the spirit of Jesus our Redeemer. And with the heart of DL Moody.

Let us do it NOT as an effort to hide away from the problems of the world, and never with the intent to shield ourselves from the harsh realities that others must face.

As disciples of Jesus, we can do this work of self-quarantines and social distancing – and all of the other necessary precautions – as a vital means of loving our neighbors in need, as a way to care for the most vulnerable among us.

It feels odd, doesn’t it? It seems counter-intuitive to stay away from other people as the best possible way to demonstrate our care and compassion for them.

But THAT is precisely what our community is asking of us now. And for the time being, we will do it.

It may be difficult. It may be uncomfortable. But for the sake of those who truly are ill, and for those who are weak and those who are vulnerable, social distancing is the loving and compassionate thing to do.

There is good news, of course, and plenty of it. On a practical level, we have lots of tools to stay in touch and to communicate. Let’s do that together, and let’s make sure we reach out to those who are more isolated, to those who truly are alone.

Let us keep the love and compassion of God as the primary motivation in what we say and in what we do, ignoring the tides of fear and anger.

On a deeper level, the good news is that God is still in charge. And God has always been in charge. After all, this planet is God’s dream, it is God’s project.

And we need never be thirsty again. Living water has been provided for us. Right here and right now, and wherever we are, God has given us everything that we need.

My friends, can you – and WILL you – trust in that promise?